As we saidin the previous post, a Denomination of Origin is a classification that is used to legally protect some products such as ham, which includes the area of production and the traditional methods used in it. For the consumer, it guarantees a constant level of quality and specific characteristics.

One of the four Denominations of Origin for Iberian ham in Spain is Guijuelo. Let’s discover the characteristics of the ham produced in this area.

The hams and shoulders come from pigs of the Iberian pig breed or from the crossing of 75% of Iberian blood and 25% of the Duroc-Jersey breed.

According to the feeding of the pigs it is distinguished:

Characteristics of hams and shoulders

In general, the protected hams and shoulders are elongated and stylised, being shaped and preserving the hoof. It weighs a minimum of 4,5 kg for hams and 3,5 kg for shoulders. Its consistency is firm in the muscle masses, and slightly oily and depressible in the areas of fatty tissue.

Outwardly, the fungal flora stands out, white, bluish grey, dark or violet in colour. When cut, it appears pink to purplish red, with a shiny appearance and veins of fatty tissue and fat infiltrated in the muscle mass. The meat has a delicate, sweet or slightly salty taste, with a low fibrous consistency and high friability.

The aroma is pleasant and characteristic. The fat is unctuous, depending on the percentage of feeding with acorns, bright yellowish-white, aromatic and pleasant flavor, not rancid.

Castilla-La Mancha: The regions of Montes Norte and Montes Sur in Ciudad Real, and the regions of Talavera and La Jara in Toledo. 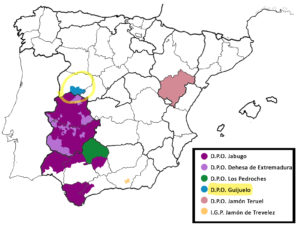 The production area comprises 77 municipalities in the southeast of Salamanca.

This information can help you to decide when buying an Iberian ham with a specific denomination of origin, as it varies the flavour and its characteristics.