In previous posts we talked about Denominations of Origin, today we will talk about D.O.P. Jabugo. Let’s remember that a D.O. is a classification used to legally protect certain products such as ham, which encompasses the production area and the traditional methods used in it. For the consumer, it guarantees a constant level of quality and specific characteristics.

In Spain there are four Denominations of Origin of Iberian ham, today we will talk about the third one.

Hams and shoulders of the’Jamón de Huelva’ Designation of Origin Jabugo are defined as hind legs and shoulders which are cured from pure-bred Iberian pigs or from cross-breeds of the Iberian breed with the’Duroc-Jersey’ and have at least 75% Iberian blood.

Taking into account the feed to which the pig has been subjected before slaughter, these pigs are classified as:

Acorn-fed or montanera-finished pork: Pigs with an entry weight in the montanera of between 85 and 115 kg, which are fed at least 50% or 65% of their entry weight, depending on whether they are pure Iberian or crossed with 75% Iberian, respectively, without any other type of diet being permitted. The maximum weight allowed at the exit of the montanera will not exceed, as average of the games, of the 180 kg.

Field fattening pig or pig finished in field fattening: Pig that replenishes at least 30% of its input weight (average input weight between 85 and 115 Kg.) in a fattening system with authorised feed. The maximum average weight of the consignments allowed at the end of the loading process shall not exceed 180 kg.

Feedingstuff or finished feedingstuff pig: A pig whose feed during its fattening phase (from an average weight of between 85 and 115 kg), is carried out under an extensive regime with authorised feed. The maximum average weight per consignment allowed at completion shall not exceed 180 kg. 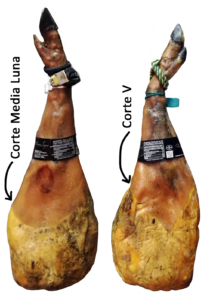 The hams and shoulders are elongated, stylised and shaped in the traditional ‘V’ shape. For the pallets,’half moon’ cutting is also permitted. In both cases preserving the hoof. They weigh not less than 4.5 kg. In hams and 3.5 kg. on paddles. Its exterior appearance is typical and clean, highlighting the coloration of its fungal flora, white or dark blue-grey. Its consistency is firm in the muscle masses, and slightly unctuous in the areas of fatty tissue.

When cut, it has a characteristic colour, from pink to purplish red and a shiny appearance, with streaks of fatty tissue and fat infiltrated in the muscle mass. The meat has a delicate, sweet or slightly salty taste with a pleasant and characteristic aroma and a texture that is not very fibrous and highly friable. The fat is unctuous and shiny, yellowish-white in colour, aromatic and with a pleasant flavour. Its consistency depends on the percentage of feeding with acorns. 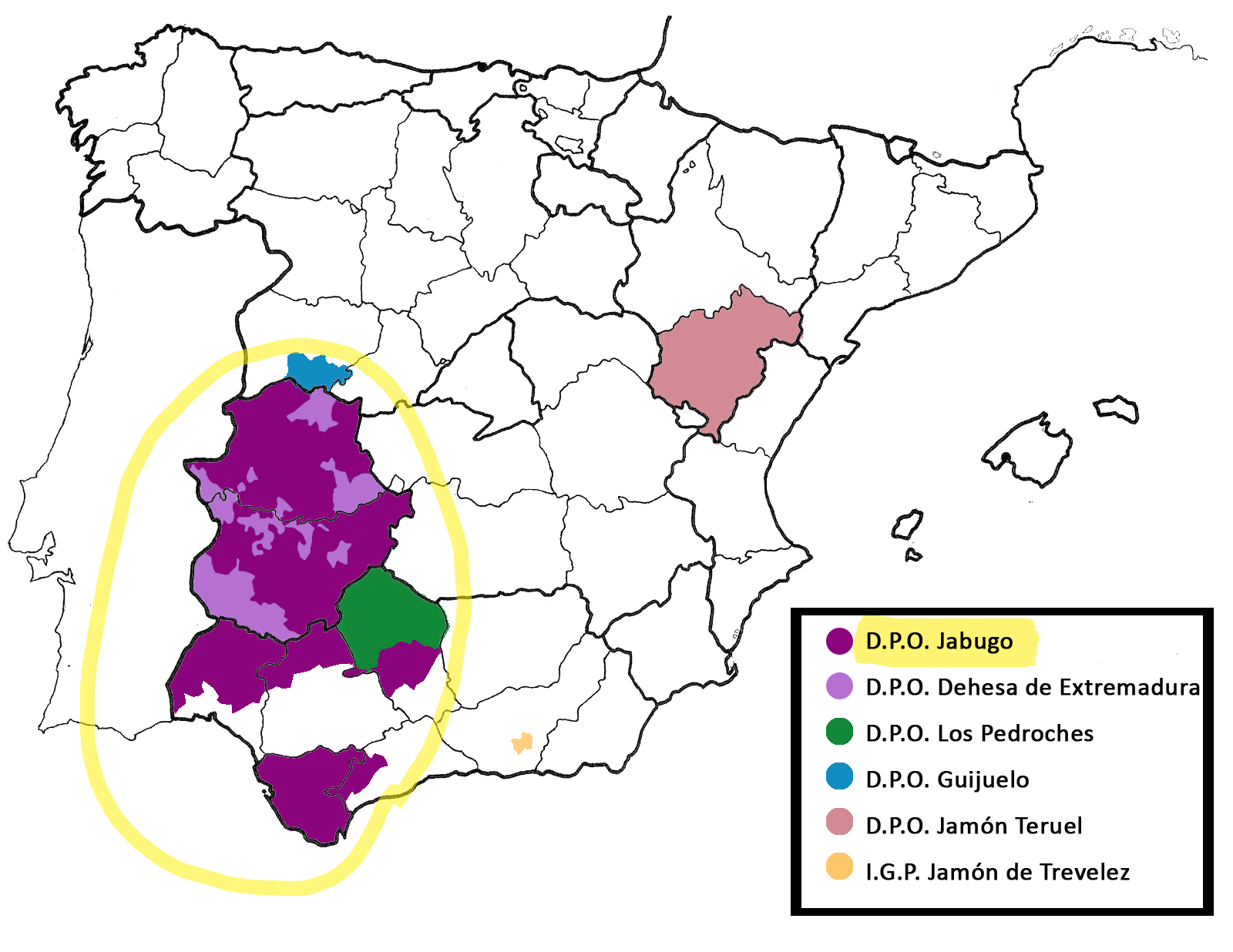 The production area is made up of thirty-one municipalities in the region of La Sierra, in the north of the province of Huelva.