Many times we see white strips interspersed in the lain of the ham. This is what we would call the marbling or the grain of the ham.

Marbling, which is fat infiltrations among muscle fibers, gives juiciness and intensity of flavour and aroma to the product. This characteristic is one of the main distinctions of  Iberian hams and  100% Duroc. This particularity is highly appreciated by consumers.

While in the Crossbred Iberian or in the 100% Duroc the grain is more generic and distributed, in Iberian hams with 100% purity (black seal) the grain is usually smaller and concentrates a large grain in the centre of the piece. 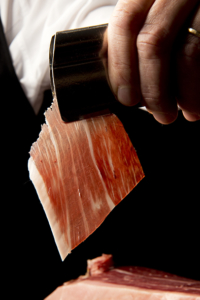 All of the 100% Iberian hams, the Crossbred Iberian and the 100% Duroc can be found in any of the Moniberic establishments.

We look forward to seeing you!

What are those white specks on the ham?

One of the things that usually draw people’s attention when enjoying  ham is that sometimes some white specks in the cutting area or slices of ham can appear.

Many people think they are bits of salt, but it is not true. They are crystallizations of an aminoacid called Tyrosine. Tyrosine is one of the 20 aminoacids of which proteins are made .

White specks appear as a consequence of a long and slow curing process of  hams, as for this circumstance to occur, time is required.

On the other hand, its absence does not imply that the process has not been carried out properly, as for they to appear, other factors must be taken into account, such as the PH of the ham, the degree of humidity or the temperature among others.

Two aspects to bear in mind:

So you know now what those white specks are! 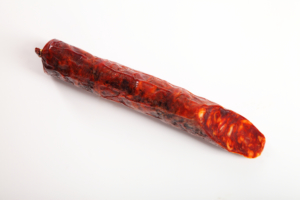 What is “fuet”? What is the difference between “fuet”...

Protected Denomination of Origin of Trevelez
Scroll to top